The Importance of Music for Young Children

I recently had occasion to question and research what is appropriate (or rather inappropriate) music for toddlers. I didn’t find the exact answer I was looking for, but I did find other fascinating information. Not much of the following is original information. Unfortunately I do not have a strong musical background. In our school we sing daily, play instruments and dance, and I play guitar a little. We do this because we enjoy music, and because I subscribe to the Mozart Effect. Studies suggest that developing a child’s musical ability may actually improve the ability to learn and be successful at other disciplines, such as language, math and science. I have CDs, of Mozart music with specific selections that are conducive to strengthening the mind, and others for improving creativity. My toddlers enjoy opera just as much as Old McDonald.

So beyond the fun, here is what is happening in the brain (adapted from an article by Jennifer Chin). Babies brains are constantly building themselves by forming new connections, or synapses, in response to the stimuli they receive. The higher the number of these different types of connections it forms, the better able the brain is to handle any new information it receives. In other words, every time a very young child experiences something new, a new pathway has been constructed that will be available the next time a similar stimulus arises. One could say that a young child's brain is organizing itself for a lifetime of learning.

In fact, a child's musical development seems to be very similar to language development. It follows a predictable sequence and includes things like learning to sing in tune and marching to a particular beat. One of the earliest and most critical stages of this development is the "music babble" stage that occurs during the first six years. Similar to "language babble" this is the time when the brain is learning to make sense of and order the sounds of music. In other words, the child is learning to make a mental picture of the music she hears in her mind. That representation is called “audiation”. Just as the ability to have a visual image of letters and words in her mind is essential to a child's language development, audiation is critical to musical growth.

Also important to musical growth is the ability to participate in music through singing and movement. It has been discovered that in order to develop skill in singing, one must develop the singing voice in early childhood. If not, the voice will not coincide with the person's ability to think tonally. In other words, a person may be able to hear the finer points of a tune, but not be able to sing it on her own. Unfortunately, studies show a steady decrease in the ability to sing in kindergartners over the last 20 years, perhaps due to lack of encouragement during those earlier years.

In order to audiate rhythm in their minds, children must experience it in their bodies. If they don't learn to do this at an early age, it is much harder as they get older. Most basic motor patterns develop before age 5 and are merely strengthened after this age.

The most recent and highly publicized study on music and children is the one done in 1997 by psychologist Frances Rauscher. She compared the spatial and temporal reasoning ability (skills needed to be successful with science and math) of three- and four-year-olds who had studied piano, with those who had spent the same amount of time learning to use computers. At the end of the study the piano students performed 34% better on spatial and temporal ability tests than the computer students. According to Rauscher, this is because music is a spatial task. It is one of the few art forms where the components are arranged in space over time, requiring mental imagery and the ability to reason in sequence. In addition, while you are engaging in music you are feeling, seeing, and hearing it all at once. Rauscher's results suggest that by influencing the brain's development with this type of training while children's brains are still malleable, those children appear to be better equipped for other spatial and temporal tasks later on.

According to Ken Guilmartin, founder of the Music Together program, "...although children acquire information and learn skills from many sources, they develop the essential disposition to learn only from the model of their primary caregivers." Your child's genes may determine whether she is capable of winning the Nobel peace prize, but your involvement in her musical development in the early childhood years can help set her up for a lifetime of successes.

If, after reading this article, you are still left with specific question, you are welcome to e-mail me at carolynnstoddlers@yahoo.com. 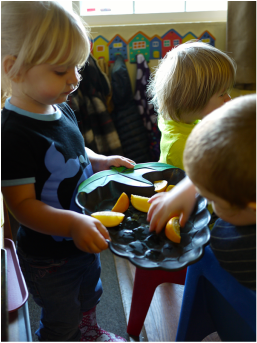